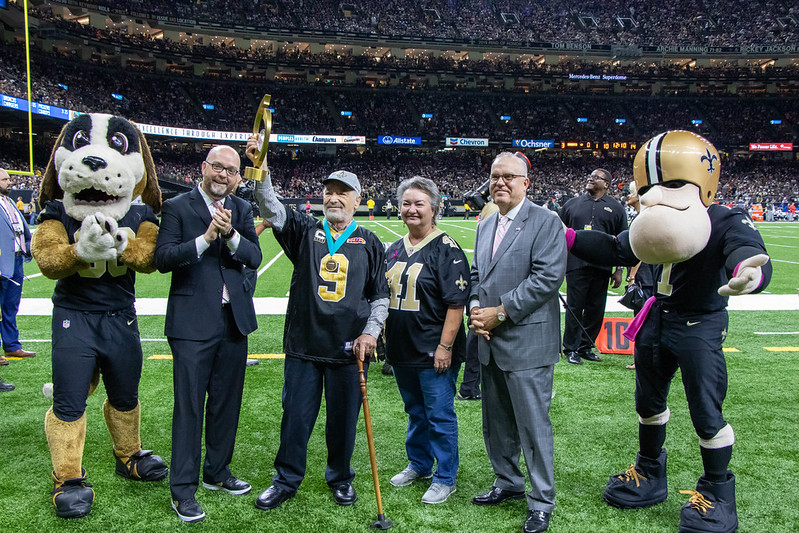 On November 10, 2018, at age 76, Dr. Juan Gershanik dedicated an 18-foot-tall monument to the Latin American workers who helped rebuild New Orleans after Hurricane Katrina. He says those men and women who brought New Orleans back to life after that storm are the real champions.

The monument stands along the Mississippi  in Crescent Park, just downriver from the New Orleans French Quarter.

Dr. Gershanik is well known for his work with premature and at risk infants, but he had never before commissioned a piece of art – much less monumental public art.  His challenge was having it be a piece that clearly conveyed a message.

Originally from Argentina, Dr. Gershanik has overcome his share of communication barriers.  But this was different. This had to communicate its message visually. Several artists offered ideas, but so many were too abstract. Even after choosing the Italian sculptor Franco Alessandrini as the artist, it took years of back and forth design changes to get a look that would clearly represent the hard work of those men and women.

Over the course of his lifetime, Dr. Gershanik has learned that with passion and perseverance, you can accomplish many things. Most of those successes can be accomplished only with the help of others. This monument – with its depiction of the teamwork that brought a city back from the brink – stands as a new statement of resilience.  And that’s just one of many reasons to celebrate Juan Gershanik as a Peoples Health Champion.

Juan was honored during the New Orleans Saints home game on October 6.