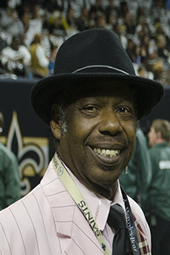 The Peoples Health Champions Program honored musician Walter “Wolfman” Washington on Dec. 30, 2018, during the New Orleans Saints game against the Carolina Panthers. At age 74, Washington released a new album—one unlike any he’s recorded in his more than 50-year career. Titled My Future Is My Past, the album is stripped down and soulful and encapsulates Washington’s belief that his success is built on everything he’s learned throughout his life.

Washington understands the value of his past experiences and mentors others to pass down the knowledge he’s gained. But even after five decades of playing with some of New Orleans’ most famous musicians, Washington knows there’s still more to learn.