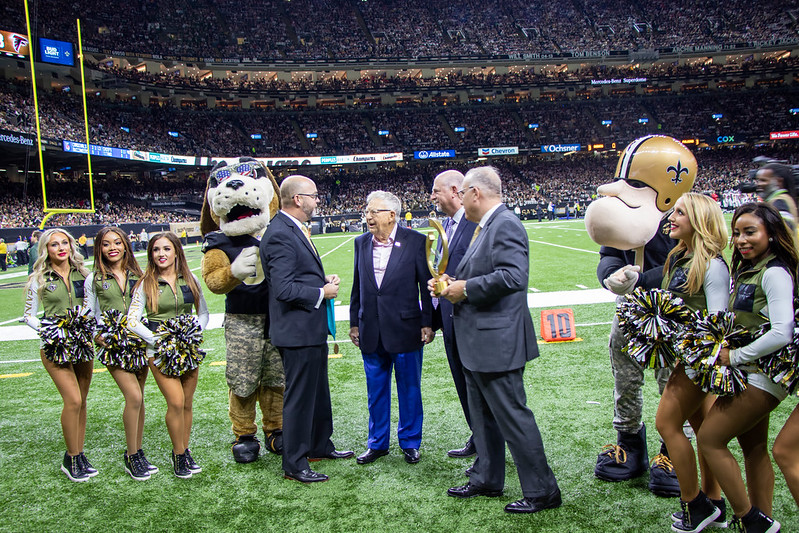 On July 1, 2018 at age 93, Paul Hilliard took the helm of the National WWII Museum as chair of its board of trustees. He is the first WWII veteran to hold that position. And he brings to the table a lifetime of facing challenges and finding solutions.

He grew up on a Wisconsin farm during the Great Depression and through years of extreme drought. He was a radio operator and tail gunner flying in SBD Dauntless Dive Bombers in the Pacific during the war. He built an independent oil company in Lafayette, LA and steered it through the toughest of times.

Leadership is a quality built on experience, and Paul Hilliard is using nearly a century of experience to lead the National WWII museum beyond the borders of its walls, broadening the reach of its lessons throughout the world.

When he was chair of the Exhibits and Collections committee, Mr. Hilliard was driven to expand a project started by museum cofounder Stephen Ambrose: documenting individual accounts of the war by those who served. Mr. Hilliard says the collection that grew from the original Ambrose tapes is the most valuable thing – the greatest treasure – the museum has. Now there are more than 9,000 of those stories, and the number keeps growing in a race against time as the storytellers, one by one, fall silent.

Mr. Hilliard saw not only that stories needed to be preserved, but that they needed to be made accessible. The museum holds a lot of lessons, he says, but the great task now is to disseminate that information. He says “we preserved it, now we have to present it, otherwise it’s worthless.” You can find many of those oral histories, indexed and searchable, at www.ww2online.org.

It’s his determination to expand the museum beyond its walls – to allow people wherever they are to learn from the experience of WWII – that makes Paul Hilliard a Peoples Health Champion. Peoples Health and the New Orleans Saints are proud to honor him.

Paul was honored during the New Orleans Saints home game on November 10.