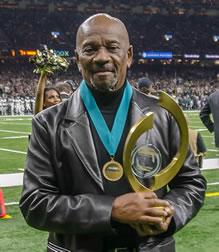 The Peoples Health Champions Program honored Dr. Johnnie W. Jones Jr. on Jan. 13, 2019, during the New Orleans Saints playoff game against the Philadelphia Eagles, for earning his doctorate in human ecology at age 83. This is just one achievement in Jones’ lifelong pursuit of knowledge.

When he was just a kid–a sixth grader–he dropped out of school to help support his family. He discovered the benefits of education and his passion for learning when he joined the U.S. Marine Corps as a young man. He took night classes to get his high school diploma, and when he was deployed to Vietnam, he took correspondence courses at LSU. Stateside after two tours, he earned his bachelor’s degree in sociology and continued his education once he retired from the Marines, completing a master’s degree in social work. He put his next goal—earning a doctorate—on hold to raise his children and to build a distinguished career with the Louisiana Department of Corrections.

Jones picked his studies back up once he retired, not as a route to a new job, but as a way to keep learning as much as possible. Jones firmly believes that “age should not impede your dreams” and that the experience that comes with age gives you greater ability to accomplish your goals.